Celebrating 25 Years of the ADA 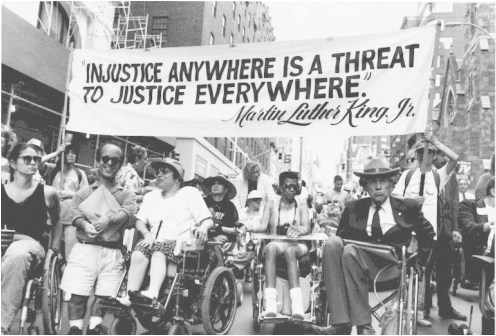 The signing of the Americans with Disabilities Act on July 26, 1990, marked the single greatest milestone in the civil rights movement for individuals with disabilities by granting people with disabilities equal access to opportunities offered all citizens.

In short, the ADA prohibits discrimination against individuals with disabilities in all areas of public life, including:

It’s about more than physical access, however. It signifies a sea change in attitudes toward people with disabilities.

“Before the ADA, they used to call us invalids. But we’re not invalids. We’re not in-valid. We are very valid.” Patrick Shivers, Tacoma, WA

The Law of the Land: Integration, Not Segregation

At the time, Washington State was on the verge of signing in support of the state of Georgia, against the plaintiffs, until disability advocates rose up to demand that our state change its position. It did. And the Supreme Court ruled in favor of the plaintiffs. Olmstead firmly established the ADA as the bedrock of disability rights throughout the country and here at home.

Almost everything we advocate for in Washington State is framed by the ADA and the Olmstead decision:

Each of these areas continues to see debate and resistance as advocates push for public policies that adhere to the ADA. So, while we celebrate the achievements of the ADA, there is more work to do to ensure that people with disabilities have access to the same opportunities as all citizens.

Watch and Share Vide0: Americans with Disabilities ACT
Washington advocates deliver a clear and powerful message about the ADA’s impact on their lives and our communities.