Charades, Anyone? (A Mom’s Perspective on Assitive Technology)

Nate has a lot to say, and has opinions on everything that goes on around him.

He has things he wants to do, specific ways he wants to do things, and an argument for every rule and decision I make. He has a favorite show he insists on watching, he has several excuses as to why he can’t eat when it’s dinner time, and he tattles on his brother regularly. In all of these ways he is like every other 9 year old I know.

However, Nate is not like every other 9 year old I know. Nate is extremely limited verbally, and most of his complicated ideas, beliefs, thoughts and decisions are trapped inside his head. He knows the words he wants to say, but he can’t make his mouth move in the right way in order to say them clearly. His words come out without most consonants, and often don’t sound like words you would recognize. 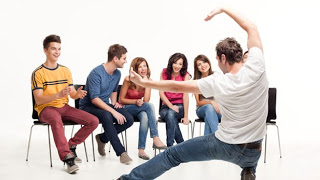 This is not to say he doesn’t try to express himself. Nate is extremely effective (I might even say gifted) at communicating what’s on his mind. He uses a combination of his very simple (but always growing) vocabulary, a few signs, pointing, grunting and acting. In short, life with Nate is like a very long, unending game of Charades, where the people around him attempt to guess what he is trying to communicate, and Nate patiently continues to convey his ideas until we finally figure it out. The people who spend the most time with Nate can more easily interpret what he’s communicating (the Charade “winners”, if you will) and people who don’t know him well usually struggle to understand him. As long as Nate is always around someone who knows him well, he’ll most likely get his needs met, his questions answered, and his thoughts heard.

The problem is that Nate is not always around someone who knows him well. We work hard to keep Nate’s world wide and to involve him in the community around him. That means he is periodically meeting new people and independently facing a world that can’t understand him. I can only begin to imagine how frustrating, scary and annoying that feels to Nate.  Additionally, Nate’s brain is developing and he’s progressing intellectually. He wants to share more complicated ideas and questions and opinions, and his Charades strategy can’t keep up.

Part of my job as his mom is to prepare him for a time when he will be navigating the world as an adult, without his support system around him. While I know that Nate will likely always need extra help, it’s incredibly importance that he learns to communicate effectively with the outside world. That is where assistive technology comes in.

Since Nate was 5, he has spent a portion of his assigned Speech Therapy hours at school learning how to communicate on an iPad. He’s spent several years learning how to operate the equipment, how to find the words and pictures he’s looking for, how to string 2-3 words together, and how to be ok putting the iPad down when speech therapy is over. By the end of 2nd grade, Nate was using his iPad to give an oral presentation on Stephen Hawking, and to give weekly updates to his class on how he spent his weekends. It’s not a fast process, and I still think Nate can express himself more efficiently with Charades than with the iPad, but it has opened up a world of possibilities.

I have a dream that one day grown-up Nate, alone with his iPad, will walk into a Starbucks and order a very complicated coffee drink without needing help from another adult. And that he will use his iPad to tell me the really funny thing that happened at work that day. And to tell me that his tooth hurts and maybe we should see a dentist.

I’m not giving up on Nate’s language and vocabulary improving, and we still work in speech therapy every week to improve his talking. However, for Nate assistive technology is a very strong and reliable backup plan. It’s also the ticket he needs for independence, safety, productivity, friendship and life in general. It’s a lifeline for him, and a cause for increased confidence and security for me. Nate has so much going on in that little red head of his, and I look forward to years of him telling me all about it!