IEP/Working With The School System (A Dad’s Perspective) 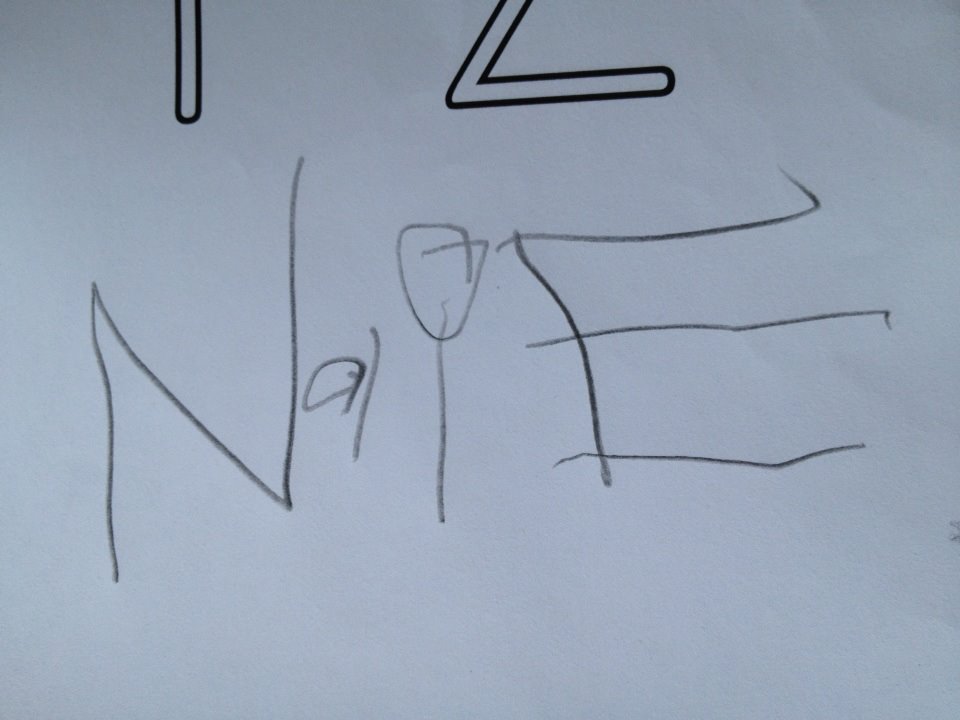 Most people who know Nate are aware that he has challenges with speaking. Fewer people know he struggles with motor control as well. He has had tremors, shaking, when attempting to do fine motor activities like use a fork or spoon or controlling a pencil or pen. His occupational therapists have attempted to introduce tools into his life to help him control these intention tremors. Things like weighted utensils and weighted sleeves can help give him more physical feedback. We have celebrated small signs of progress like holding a fork with the proper grip, and more recently, feeding himself cereal with only moderate liquid mayhem left in his wake. Two weeks ago, Rachel brought Nate to the local Boys and Girls Club to watch his brother’s basketball game. Nate wandered off to play with some Legos. Rachel walked over to check on him a while later and saw him drawing on a piece of paper. He loves to draw, so there was no surprise there. More accurately, he loves to scribble. What Rachel saw when she peered over his shoulder was something she never expected to see…maybe in his entire life. There was Nate’s name, written in his own handwriting, plane as the bright red hair on his head. Miracle. It was the type of moment where parents who have worked hard to temper expectations for their son’s future could dream a little. If he can write his name by age 8, what will he be able to do when his 12 or 18? These are the questions we tackle when working with the school district on Nate’s Individualized Education Plan (IEP). It is that process, and the team of people that have spent countless hours with Nate, that made the impossible, possible.

I am lucky to have a wife who has dedicated time to learning about the system and understands better than most what it means to be an advocate for your child. She knows every therapist and teacher working with Nate, and knows every goal that has been set. Mundane tasks like buckling a seat-belt, or brushing teeth appear on the list. Striking the balance between fundamental life skills and true academic education can be difficult. All of it aligns to the goal of enabling a more independent adult life for Nate.

Some of the more difficult moments are when our goals do not align completely with the school district. Taking care of special needs children is expensive and challenging. While we know the people want what is best for Nate, we also know they face tight budgets and a dearth of qualified, affordable candidates to hire. The human in me empathizes with them. The parent in me has to largely ignore it and focus on what is best for my son.

Nate originally started out his schooling in the special education class, at a school that housed the program. He took the bus there. The teachers were great. It also was not the right place for Nate. Rachel had been learning about inclusion, and one of the things that became clear to her was that Nate was never going to learn the necessary behaviors from his peers in this class or be challenged to reach his potential in the same way as if he was surrounded by typically developing students. I was skeptical of her conclusions early on. The idea of putting Nate, with all his odd outbursts, and his unrequited hugs, in a school of typical kids with parents that didn’t know him was scary. I know how cruel kids can be to a kid that has a different backpack, let alone one that behaves like Nate.

Rachel convinced me over time, and then we worked together to convince the school district. He was attending Sunday school every week for hours with an untrained teenager watching him. Was it such a stretch to think a trained adult aid could help him through a school day? The idea was met with plenty of skepticism and reluctance. Some of it was due to real questions about whether it was the right thing for Nate, and a lot was due to the expense and logistics required to pull it off. We worked through it.

Nate has attended his neighborhood school for the last three years. The kids treat him well. The teachers have been terrific, and the parents have been understanding. We no longer spend time in the IEP meetings debating whether he belongs there. We focus on what we can do next to help him reach his undefined potential. He is a gift that is being unwrapped over years. Nobody other than Nate really knows what is inside. He can write his name now. I cannot wait to see what he does next.