The Thrill Of Connection

One of the most rewarding, fascinating and frustrating parts of being a parent of any child is seeing echoes of yourself and your loved one emerge as he or she grows up. Isaac, our oldest son, behaves so much like me at times that I have to be reminded to not assume he is re-living my life. I see facial expressions that remind me of my wife’s family. I see empathy and compassion that remind me of my mom. We reach a deep level of understanding about who he is by observing his life, and through conversations that become deeper and more meaningful as he gets older. It gives us a chance to not only see his nature, but attempt to nurture and influence. Nate is different. His communication skills have never been strong, leaving us largely to play a nine-year game of charades where blood-curdling screams mean “wrong” and that impossibly awesome smile means jackpot. When the goal is just trying to find out whether he wants Scooby-Doo or Teen Titans, dreams of deeper dialogue that can lead to meaningful connections begins to fade. We have not risen that far off the floor of Maslow’s hierarchy of needs. But like all of life’s wonders, it is the contrast between the expected and the actual that create magic. This is one such story.
Having a special needs child like Nate can feel like there is a stranger in the house. He is a mix of behaviors that are by definition abnormal, but also behaviors and physical characteristics that are immediately familiar. His face often reminds me of my mom’s side of the family. His electric orange hair reminds me of my father. He came out of the womb pleasant and at-peace in a way that only my wife can be responsible for. I am many things, but pleasant and at-peace, I am not. Nate’s total disregard for property definitely comes from my wife. If you could take a Cuisinart, tie permanent markers to the spinning blades, fill it with milk, and let it run through the house, you would have some approximation of what Nate likes to call, “the afternoon.”

My dreams as a father were always about having a close-knit family that laughed together, but more selfishly, I wanted a son I could share my sports obsession with and hopefully watch some horribly-reviewed Adam Sandler comedies with. Isaac was athletic from the jump, crawling at just after five months and showing a natural coordination that translated well to most sports he played. He liked soccer, dabbled in baseball, and eventually fell in love with basketball. We watched bad movies early on, and have a long list ahead of us. He never, though, loved football.

Those that know me, or my alter-ego Hawk Blogger, know it is my obsession. I used to watch every baseball, basketball and football game for my favorite teams, but having kids and work forced me to prioritize, and NFL Sundays were impossible to leave behind. Part of the reason I started blogging about the Seahawks was the total lack of interest from anyone in my house. When a game came on the TV, I would head to the basement and watch by myself, while the rest of the family tried to ignore my random screams of joy and, more often, age-inappropriate language. I needed an outlet.

One of the great moments in my life came just last year when Isaac went from hating football and vowing to never watch a game, to loving it. It was as simple as him playing Madden football on his XBox, and getting hooked. We now share that passion. He comes to games with me. We talk about players. We talk about past greats and future legends. It brings us close in a way that only a father and son can be close.

Expecting to find that connection with Nate was impractical at best, and hopeless at worst. How could he come to understand what was happening in football game, let alone decide that the Seahawks were his favorite team? His only real exposure was being in the room when I screamed and scared the daylights out of him; not exactly a recipe for cultivating a desire for more. But Nate does not adhere to convention. He defies it.

He hits people. They love him. He screams. People laugh. He tells people to shut up. They laugh even more. At some point along the way, Nate decided he loved the Seahawks. He loves them so much that a kid most would consider non-verbal, manages to say “Si-hawks” a lot.

“Who is your favorite team, Nate?”

Football comes on the TV. “Si-hawks?”

“No,” I answer. “the Seahawks aren’t playing right now.”

“Boooo!” Nate reacts while giving an emphatic thumbs down, with both little thumbs no less. “Si-hawks!”

I have no idea what brought on Nate’s love of the best team in the NFL. He was rarely around when I was watching games, as Sunday school took his mornings, and I attended all the home games. We did not talk a lot about it because until last year, I was the only one who cared. Words were not necessary. Years of trying to show him the wonder of a shoestring catch or punt return for touchdown were not necessary. He came to love what I loved because he is part of me, and part of this family.

We are so often characterized by what we cannot and are not. Nate has a growing collection of what he can and who he is. That is what we celebrate in-between the screaming. And now, part of who he is also happens to be a big part of who I am. We are Seahawks fans. Go “Si-Hawks!” 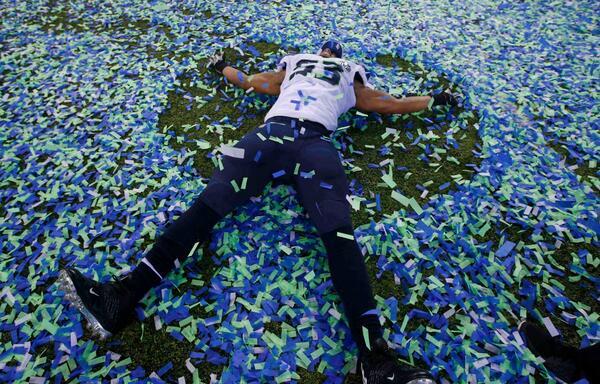