The Trumpet (A mom’s perspective on inclusion) by Cori Ponte

Inclusion. What does that mean? Well, let’s briefly talk about it. Inclusion is a model of education in which students with special educational needs spend a large portion of their day learning in the general education classroom with “typical” peers. For Mason, he has additional para-educator support (an aide) in gen ed and also goes to the Resource Room for smaller group instruction. The idea of inclusion is also supposed to carry over to specialists (art, music, library, P.E., etc). Sometimes it works. Sometimes it doesn’t. Some teachers are fabulous in going the extra mile, while others don’t really want to work with “those kids”. Regardless, whether inclusion, gen ed, or a more contained classroom – it varies upon each student’s needs. In an ideal world, there would be enough funding and staff to support all students in an inclusion model – but that’s just not reality.

Enough about that – let’s talk 5th grade – YES, Mason is a 5th grader! Now, let’s narrow the scale to music for a 5th grader (did you catch my pun…scale – music? hee hee). Music in 5th grade doesn’t mean singing the songs and doing “choir” performances during the year. Music in 5th grade means INSTRUMENTS. You heard me. INSTRUMENTS. Week one of school and Mason brought home the “warning” letter about band and orchestra. Knowing this was coming, I sent a preemptive email to the music teacher asking what he thought might be the best fit for Mason. I’m thinking bell, a drum, wood block, etc. The easier (for mom that is), the better.
On Friday the class had music and saw/heard a demonstration from a variety of instruments. When I picked Mason up after school, he was bubbling over with excitement and information about the cello, trombone, viola, violin, tuba, flute, etc. He spewed information about each instrument. As we were leaving, I spotted the music teacher and quickly raced over. “So, what do you think would be a good fit for Mason this year”? His response? “Whatever instrument he is interested in playing”. Um, wrong answer! Let’s think easy, quiet, low risk of frustration, etc. Let’s not do the whole “whatever” thing. But, no, the music teacher pulled the whole “whatever he’d like to play” card. AAAHHH. The music teacher went on to say that he wants the students to pick their top 3 choices of ANY instrument and then he makes the final decision. His rationale was two-fold. First, he wants the students to WANT to use the instrument and therefore practice at home. Second, he can adapt/modify anything so the student (Mason) has success. Um – excuse me? I understand this is a great inclusion model, and all, but seriously? The thought of a tuba in the house makes me shudder. Not to mention a stringed instrument which I have no idea what to do with (I played the flute and piano). Hmmm, now the burden is on me to help “guide” Mason’s choice so that I will survive the year.
So, Mason and I went home and looked up all the instruments again on-line. There was NO guiding him – his mind was made up. He decided his three choices were: 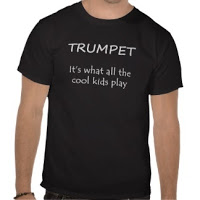 1.      Trumpet
2.      Violin or Cello
3.      Percussion
Yesterday “the letter” came home. He was assigned THE TRUMPET. He was ecstatic! I had other thoughts. So,today after school, we procured said trumpet from the music teacher (thankfully – if you are all aware of my current situation, you’ll understand – the school had one we could borrow vs. rent). The band teacher showed Mason how to put the mouthpiece on and how to blow. Guess what? He made a sound! So, as one would expect, he’s been serenading Lauren and I most of the afternoon. He LOVES it. I think he loves it more because he can make more farting noises – but he is actually making “trumpet noise” too.
While I joke about this situation in relation to inclusion –this IS what inclusion is supposed to be. The band teacher was fabulous and didn’t even miss a beat. He explained that if Mason picked a stringed instrument then maybe he could “pluck” vs. using a bow. If Mason picked a woodwind/brass, then they’d just figure it out so he could participate with his peers. This is what a parent of a child with special needs earns for – and I’m just thrilled that Mason has a band teacher who embraces him, considers his needs, considers his abilities, and considers how to include him (yes…trumpet and all)! Three cheers for a wonderful start to 5th grade and a great band teacher! Now, where did I put those ear plugs?