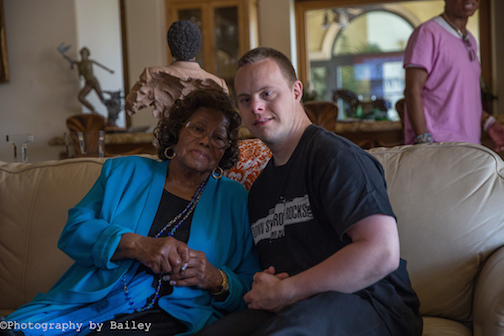 Dylan Kuehl (pron. Keel) is a visual artist, musician and dancer from Olympia, Washington who received his first drum kit at the age of 3. Dylan was born with Down Syndrome and has always lived life to the fullest and dreamt big. Today, at age 33, he has a jewelry line, an inspirational DVD, and a musical project called the Jackson Memory Band, which he formed after Michael Jackson’s death in 2009.

One of Dylan’s biggest dreams came true on June 17th, 2016, when he had the opportunity to meet members of Michael Jackson’s family—mother Katherine, brother Jermaine, and son Blanket—made possible by the non-profit organization Gifts from the Heart for Downs. Dylan performed his Michael Jackson dance moves in the very ballroom where the Jackson 5 rehearsed in Los Angeles, paying tribute to one of his heroes. His dedicated and heartfelt routines brought both Jermaine and Katherine to tears.

Gifts From the Heart For Downs was founded in 2010 by Kimberley Adams, a single mom who adopted two children with Down syndrome. The non-profit grants wishes for items such as adaptive bicycles, vacations to places such as Disney World, and she’s been successful at making contacts with celebrities such as Julie Andrews, Brett Favre and John Travolta. Dylan was one of the first requests she received. After six years of networking, Kimberley finally made contact with someone close to the Jackson family.

For the special day, Diva limousine company donated their services. Dylan and his mother, Terri, rode from their gifted Marriott hotel to Hayvenhurst Mansion, the old home of the Jackson family. Jermaine gave them a tour of the estate, now vacant, which is being considered for a tourist attraction. In one room, there is still a mirror where Michael wrote “THRILLER 100,000 COPIES” and looked at it every day, trying to make it happen. That’s the kind of visualization that Dylan uses in his daily practice, with encouragement from his mother Terri. “That’s who we are, we dream it and then we make it happen,” she says. “That’s a really a great lesson for Dylan.” 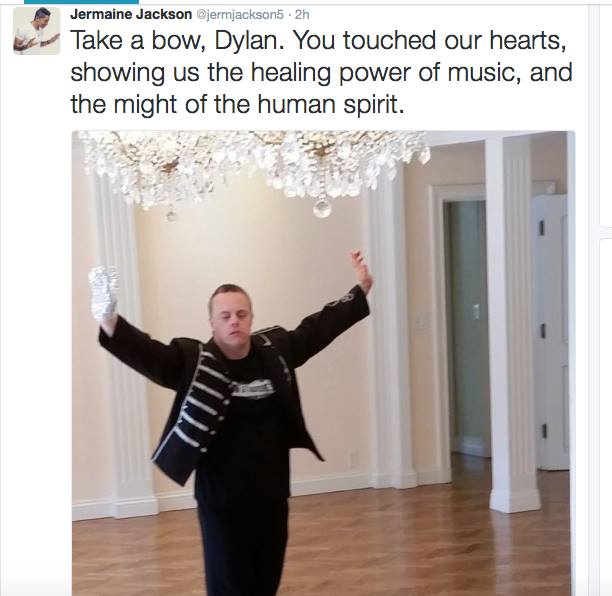 After the mansion tour, Dylan danced “Stranger In Moscow” and “In The Closet” for Jermaine in the chandeliered ballroom where Jermaine rehearsed with the Jackson 5 playing bass. The music came from a Michael Jackson video played off an iPad, which Dylan has watched religiously, perfecting his moves to mimic Michael’s; Jermaine commented that Dylan hit every single move of Michael’s. Tears came to Jermaine’s eyes during Dylan’s performance, and he called his mother Katherine, and asked if she would be up for a visit. He thought Dylan was someone she should meet. She agreed.

At Katherine’s home, Dylan met Katherine as well as Michael’s son Blanket, whom Dylan bonded with over Star Wars. Dylan danced his “In The Closet” performance. Katherine said she’d never met anyone like Dylan before; they hugged and Dylan cried with her. Dylan’s mom Terri recalls: “Katherine said, ‘Every day I wake up and I think about Michael,” to which Terri replied, “Dylan does too.”

Katherine said that Michael was shy, but once you put him on the stage, his star power shined through, which is how Dylan is. Dylan’s birthday, June 25th, is also the day that Michael passed away, so while Dylan’s birthday is now a day of mourning, it also marks a day of rebirth and keeping Michael’s music alive. 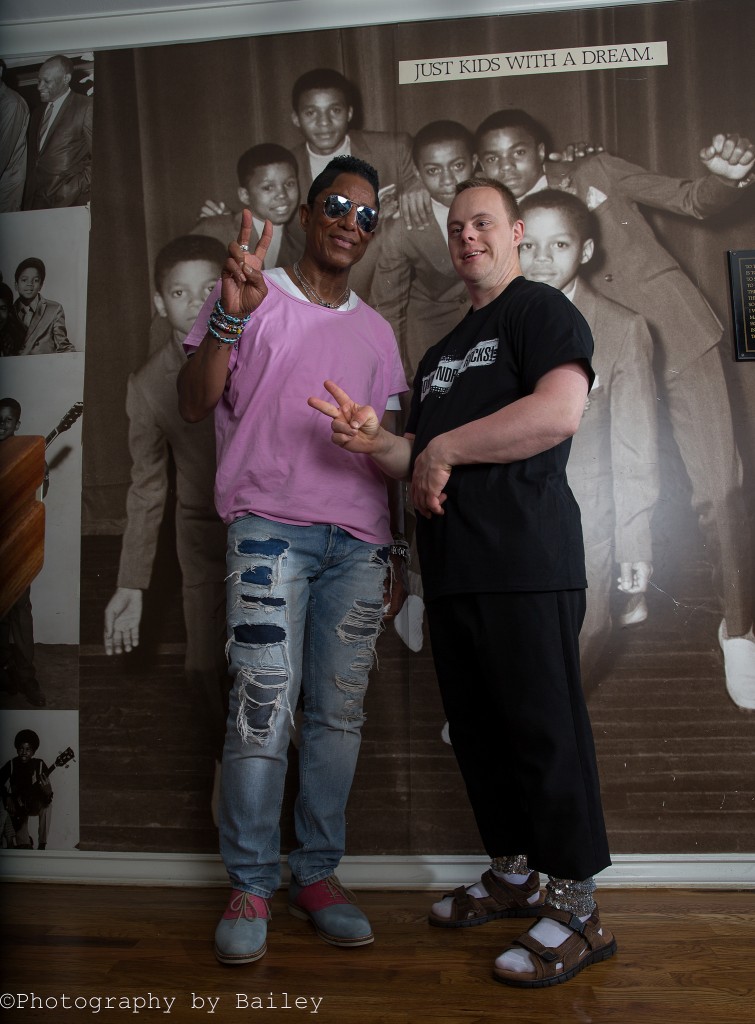 Dylan gave Jermaine and Katherine pieces of glass jewelry that he created, and extras for Katherine to give to Michael’s daughter, Paris. Dylan gave Katherine many of his watercolor postcards, and she plans to enlarge one called “Barn Life” and hang it in her home.

Dylan also gave them “Down Syndrome Rocks!” T-shirts and “Michael Jackson Memory Band” T-shirts, as well as a copy of the book in which Dylan is featured, Reasons to Smile: Celebrating Living with Down Syndrome, which Dylan dedicated to Michael. Dylan also gifted them his DVD titled “Reach Dream Celebrate Abilities: 4 Easy Steps To Build Your Own YES Team.”

After the dream meeting, Diva limousine took Dylan and Terri to be treated at the Hard Rock Café on Hollywood Blvd. Dylan ordered a non-alcoholic Mango Berry Cooler, and they played MJ songs for him such as “Billie Jean” and “Black And White” as Dylan shoulder-shrug danced along.

Inspired by this miraculous day and encouragement from Jermaine, Dylan talked about really amping up his Jackson Memory Band, and started discussing new members for the cover band, for which he drums, plays percussion and dances. Dylan’s band has been created to show the greatness of Michael’s music, but also to promote inclusion of people of all abilities, and the healing power of music. “I just need to keep his music alive. That’s all,” Dylan says of Michael. “So he won’t be forgotten.”