You gotta learn to walk first, then you fly

This is the third article of three part series about giving our children opportunities for inclusion in the community. As I alluded to in my last article, my son Matty achieved his greatest inclusion situation in our lives together, and now the sky is the limit for us (pun intended!). But let’s bring it back to the beginning shall we…. 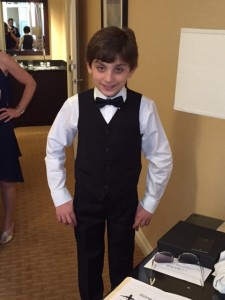 My son’s little life has been filled with more than his share of struggles and challenges, all of which he has handled with dignity and grace. I would only hope I could display the same if I were in those situations, one of which was walking. He was almost three before he began to walk, and it was walking in the loosest of form. He eventually got better at it, and that’s the catalyst that started this whole community inclusion process going. Those steps would take us out of our small apartment to a new world of adventure. So now let’s jump ahead ten years later, to last summer…

My brother told the family he would be getting married. He asked me to be his best man, and he and his fiancé wanted Matty to be in the wedding. We were all very excited, but then it dawned on me…my brother lives in California!!! HOLY CRAP!!! How am I going to do this? I began to run all the scenarios through my head. Car? Train? Fly? (Gulp) Well, after a few months of night sweats and dry heaves, I decided flying would be the best option.

How am I going to do this? I began to run all the scenarios through my head. Car? Train? Fly? (Gulp)

Okay, so at this point, I’m basically terrified of how this is going to play out. I’m thinking to myself, if someone messes with my kid on the ground—be it stares or whispers or words—I’m gonna pop off. It’s the mouthy New Yorker in me. I can’t help it. It’s rare I have to anymore, but still, it’s a bad deal for everyone if you misbehave on an airplane. I had vision of my kid crying and some jerk mouthing off, which would inevitably end up with me in the Sky Marshal’s office. A bad, bad scene!

We needed to set this up for success. So, after a few more gagging dry heaves, a plan was set in motion. We would prepare for the trip months in advance, with stories and videos and stuff. I am truly lucky to have such a great partner in life, Trish, who understands how kids with challenges work. She made social stories, read books, watched videos, etc. It was great. I was still gagging and dry heaving around town, but my kid was totally excited to fly! I took a little comfort in the fact that my parents would be flying down with me, and they would be extra help, so there was that. Trish would fly down a few days later with her son.

Let’s fast forward to about two weeks before the wedding. My father gets shingles, and both he and my mom are unable to attend the wedding. There goes the extra help! After a few more dry heaves, I say to myself, I got this. I’ve dealt with hard things. Just man up and do it. We packed our bags, prepared for the trip, and we were as ready as we would ever be.

It’s the day of the flight. My kid is stoked. Me? Not so much. I’m mostly worried how he will deal with the change in cabin pressure and turbulence. Plus, there is all the pre-wedding and rehearsal stuff, meeting new people who soon will be family. It’s stressful stuff that I’m worried about, but the cabin pressure change is the issue at hand. In my carry on bag, we have like a hundred packs of gum, and gummies, and chewies, and whatever the hell else you can chew to pop ears. I pack like a nut and, finally, we’re off!

We get to the airport ridiculously early because A) I’m a nut, and B) I have to tell everyone associated with this flight my kid has a disability and we need to set this up for success. Every ticket counter I approach and person I speak to, I make sure they knew what the score was. He has a disability. First time flying. Yada yada yada. Twice during the check in process, by two different people, at two different sections of the airport, I’m asked, “Sir, are you the one with the disability?” I find the humor in it now, but at the time, not so much. So I calm myself down, and we prepare to board the plane.

Twice during the check in process, by two different people, at two different sections of the airport, I’m asked, “Sir, are you the one with the disability?”

Matty and I actually get on first, and we find our seats. Now I’m wondering who’s going to be sitting next to him. He’s in the middle, I’m on the aisle, and the window seat is open. We are flying into Orange County, California, so it could be anybody. With that, a businessman comes and sits in the seat next to Matty. The guy smells like a crisp hundred. The dude is dressed perfect, about fifty, clearly on a business trip. We say our hellos and he immediately recognizes my kid has got some challenges. He just smiles and says, “Nice to meet you.” We are ready for takeoff. I gag a few more times and we’re off!

Our plane speeds down the runway and takes flight. Matty is a little squirrelly because we are in the air, a new sensory sensation for him. But after a few minutes, the dude is rock solid. It’s awesome. I can’t believe it. He is perfect. All that dry heaving was for nothing! We talk the whole flight. He asks me the same question like a thousand times, but I don’t care. We are flying. It’s a tremendous experience, and I can see Mr. Moneybags smiling at us too. Now for the landing…

Landing in Orange County can be a little windy, and this day is no exception. I’m trying to explain to Matty that the bumps we’re feeling are like the bumps we feel in the car. He starts to get it. When we’re on final approach, the plane is hitting air pockets. One is pretty good, and we feel a lot. Matty grabs my hand. I look to my left, and he’s grabbed Moneybag’s hand too. Oh crap! Moneybags turns to him and say, “It’s ok Matty, we’re almost there, I’ll hold your hand too.” The three of us hold hands, and we land a perfect landing!

Matty grabs my hand. I look to my left, and he’s grabbed Moneybag’s hand too. Oh crap! Moneybags turns to him and say, “It’s ok Matty, we’re almost there, I’ll hold your hand too.” 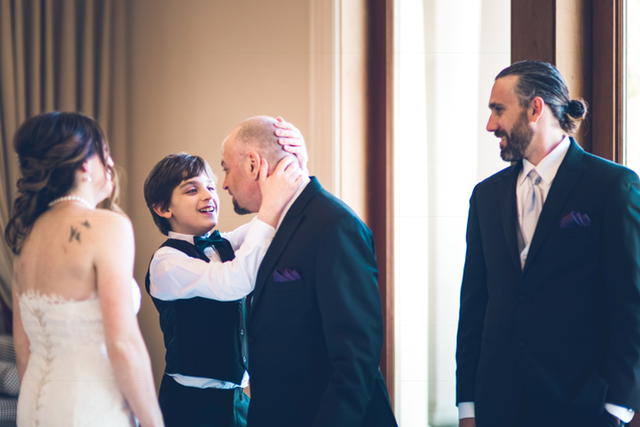 It was incredible how it all played out. It was an amazing start to an unbelievable weekend. Matty did great in the wedding. He participated, and he even looked like Moneybags in his suit too! He met family members of mine from the East Coast that had only seen pictures of him, but never in the flesh.

My new sister-in-law’s family was so nice and perfect with my son, I couldn’t have asked for better people to join my own family. Trish and her son made it, too, and the family was complete! Matty danced, and ate, and did all the cool things people do at wedding. It was a beautiful day on many levels, but it was a beautiful day for Matty, too, because now the sky is truly the limit for us.

What if my fears may have kept him back from this experience? It would have been out of love, but would he have grown? We made so many memories that he still talks about today. I think it’s important to remember this: our children are not ours to keep. They are gifts we raise and instill things in, but in the end it’s their life to live. They deserve the chance to experience independence, and fulfilled lives, and all that this amazing world has to offer them.

We will go back to California for another visit, and now Matty’s future is bright with travel. He’s going to see this country and its vast beauty—a far cry from ten years ago when we lived in an apartment, and all we looked at was the four walls. Back then, hope was just another four letter word in my vocabulary. But that’s all different now, because Matty had to learn to walk, before he learned how to fly!

I hope you enjoyed reading these stories, because I enjoyed living them as much as I enjoyed telling them, both the good and the not so good. It’s what made me who I am today. Adversity should never define you; it’s how you rise above it. That should be your definition.

About Matt Graffagnino
I’m the father of two children with special needs. Writing enables me to release my emotions and fears for my children. I try to tell a story about my life experiences that other parents can relate to and say, “I totally know what he’s talking about.” My writing is similar to how I verbally tell a story, with drama and a bit of comedy infused with wild Italian hand motions.